Ankle arthrosis is a dystrophic degenerative pathological disorder characterized by the gradual destruction of cartilage, joint and adjacent bone structures, as well as ligaments and even muscles, which leads to impaired mobility and even disability of the patient. The reason for the development of such a pathology may be traumatic injury, in which post-traumatic arthrosis of the ankle joint develops, metabolic disorders in the body, or some inflammatory diseases.

Do not self-medicate. At the first sign of illness, see your doctor.

The diagnosis of pathology is established taking into account the patient's complaints, as well as on the basis of the results of X-ray examination and ultrasound. It is necessary to treat the disease mainly conservatively and only in severe (neglected) cases surgical intervention is indicated.

The disease has a chronic undulating course, in which periods of exacerbation alternate with periods of calm, but still, the progression of the pathology, even in the absence of symptoms, continues, therefore, over time, the ankle is completely destroyed if treatment is not carried out. Most often, older people suffer from arthrosis, due to the natural metabolic processes in the body, but there are other reasons for the development of arthrosis.

In medical practice, there are two types of arthrosis: primary and secondary. Primary develops as an independent pathology, for no apparent reason. Secondary is the result of any adverse effects, for example, traumatic injuries.

The main causes of the onset of the disease can be as follows:

Sometimes the disease occurs in children, and its causes can be:

Ankle arthrosis has three degrees of course, which determine the symptoms of the disease. It is important to remember that the disease develops gradually, therefore, disorders in the joint will be insignificant at first, and then more and more pronounced. At the same time, the changes that have appeared are already incorrigible, and the treatment of pathology at one stage or another will consist only in preventing the progression of the disease.

At the first degree of the disease, the tissue becomes thinner, and this does not happen on the entire surface, but in separate parts - specific islets are formed.

The disease of the first degree is characterized by the following symptoms:

X-ray or ultrasound examination does not reveal any pathological changes in the joint, therefore, at this stage, doctors cannot make a diagnosis.

At the first stage of the disease, it can be treated at home with folk remedies - first of all, refuse to wear shoes with heels, lose weight (if necessary), do exercise therapy, and also use some folk methods, which will be discussed below.

With the second degree of the pathological process in those areas where the tissue has thinned, the load falls on the underlying bone. Because of this, it grows, forming osteophytes, which injure healthy areas of cartilage tissue located opposite or nearby. Symptoms of the second degree of arthrosis are already more obvious, these are:

In the third degree, deforming arthrosis of the ankle joint develops. During this period, the tissues of the entire joint become thinner, like the bone structures, the muscles on the one hand are overstretched, and on the other, on the other hand, they spasm, trying to keep the joint in the correct position. Symptoms of the third degree of such a pathology as deforming arthrosis of the ankle joint are associated with a complete violation of its mobility and severe pain:

Pathology such as traumatic arthrosis of the ankle joint is characterized by some other symptoms: 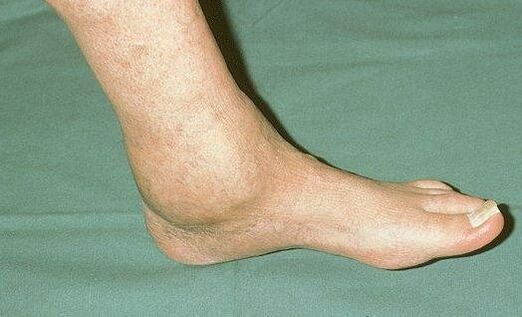 A decisive role in the diagnosis of the disease is assigned to X-ray examination. However, it is important for the doctor to listen to the patient's complaints, which may allow him to make a diagnosis at an early stage, when radiographic changes are not visible. In severe cases, the patient is referred for ankle CT or MRI.

Treatment of ankle arthrosis depends on the stage of the disease. At the initial stage, it is enough to change the way of life and the correct motor regime. Massage and exercise therapy will be useful at this stage, which will improve blood circulation. If we talk about treatment with folk remedies that can be used at home, then it can reduce pain and relieve the inflammatory process. These folk remedies that anyone can use at home are:

There are other alternative methods of treatment, but it is important to remember that they are not a panacea for the disease and that only their complex use together with drug therapy, diet, exercise therapy and the correct lifestyle will stop the progression of destruction.

If we talk about the treatment of arthrosis of the ankle joint with medication, then it consists in the use of anti-inflammatory and analgesic drugs. In addition, patients are prescribed chondroprotectors that protect the joint for a long time (at least six months).

To improve the nutrition of the affected joint, the use of vascular drugs such as niacin is indicated. Hyaluronic acid therapy is considered effective, and in some cases a one-time administration of hormones is required.

It is also necessary to treat the disease in combination with physiotherapy methods. Shown are special exercises for arthrosis of the ankle joint, which in each case are selected by a physiotherapist. It is very important that gymnastics with arthrosis of the ankle joint does not cause pain to the patient, but at the same time, the person should experience some discomfort, because otherwise the procedure will be ineffective.

Among other physiotherapeutic methods, it is shown:

Surgical operation for this disease is indicated only in severe cases when the joint is completely destroyed. Often, patients have joint prostheses, which returns their limbs to mobility, but other surgical techniques are also used - the doctor makes the choice, taking into account the patient's condition.