Coxarthrosis of the hip joints

Cartilage is the first to suffer with arthrosis, then bones and surrounding structures - ligaments and muscles - are involved in the pathological process. If there are changes in the bones, the prefix "osteo" is added to the word "arthrosis". In advanced cases, the joint is deformed, and they already talk about deforming arthrosis (osteoarthritis).

Deforming osteoarthritis of the hip joint is the second most common after gonarthrosis of the knee. Due to the deep location of the hip joint, bone deformity can go unnoticed for a long time, and only X-ray images taken in the later stages will show changes.

The development of this disease is influenced by various factors, including an inactive lifestyle, trauma and metabolic disorders. It is because of the specifics of modern life, in which there is often no room for physical education, that arthrosis affects an increasing number of people. Moreover, the peak incidence falls on the middle age group - from 40 to 60 years.

The thigh joint is formed by two bones: the femur and the iliac (pelvic). The head of the femur enters the acetabulum of the pelvis, which remains motionless during movement - walking, running. At the same time, the articular surface of the femur can move in several directions, providing flexion, extension, abduction, adduction and rotation (rotation) of the thigh.

During physical activity, the femur bone moves freely in the acetabulum due to the cartilaginous tissue covering the articulating surfaces. Hyaline cartilage is distinguished by its strength, firmness and elasticity; it acts as a shock absorber and takes part in the distribution of the load during human movements.

Inside the joint is the synovial fluid - the synovium - which is essential for lubricating and nourishing the cartilage. The entire joint is enclosed in a dense, thin capsule surrounded by powerful muscles in the thighs and buttocks. These muscles, also acting as shock absorbers, serve to prevent injury to the hip joint.

The development of coxarthrosis begins with changes in the joint fluid, which becomes more viscous and thicker. Due to a lack of moisture, the cartilage does not receive enough nutrition and begins to dry, loses its smoothness, and cracks appear on it.

Bones can no longer move as freely as before, and rub against each other, which causes microdamage in the cartilage. The pressure between the bones increases, the cartilaginous layer becomes thinner. Under the influence of increasing pressure, bones are gradually deformed, local metabolic processes are disrupted. In the later stages, there is a pronounced atrophy of the leg muscles.

Deforming arthrosis of the hip joint can be primary and secondary. It is not always possible to establish the cause of primary arthrosis. Secondary arthrosis appears against the background of existing diseases, namely:

Dysplasia of the hip joint is a congenital malformation that sometimes does not manifest itself clinically for a long time and in the future (at the age of 25–55 years) can lead to the development of dysplastic coxarthrosis.

Coxo arthrosis can be left-sided, right-sided and symmetrical. In primary arthrosis, concomitant diseases of the musculoskeletal system are often observed - in particular, osteochondrosis and gonarthrosis.

There are also risk factors that contribute to the onset of the disease:

It should be noted that coxarthrosis itself is not inherited. However, certain features of the metabolism or structure of connective tissues can create prerequisites for the development of arthrosis in a child in the future.

The leading symptom of arthrosis of the hip joint is pain in the hip and groin area, which has varying intensity. Stiffness and stiffness during movement, a decrease in muscle volume, shortening of the affected limb, and a change in gait due to limping are also noted.

Coxarthrosis most often progresses slowly, causing discomfort at first and mild pain after exertion. However, over time, the soreness increases and appears at rest.

A typical manifestation of pathology is difficulty with hip abduction, when a person cannot sit "astride" on a chair. The presence and severity of signs of coxarthrosis depend on its degree, but the pain syndrome is always present.

There are three degrees or types of arthrosis of the hip joint, which differ in the severity of the injury and the accompanying symptoms:

Arthritis is an inflammation of the joint, which can be an independent disease or develop against the background of systemic pathologies (for example, rheumatism). In addition to the inflammatory response, the symptoms of osteoarthritis (especially in the advanced stages) include limited mobility and changes in the shape of the joint.

At the heart of degenerative-dystrophic changes in arthrosis is the defeat of the cartilage tissue, which often leads to the appearance of inflammation. That is why arthrosis is sometimes called arthrosis-arthritis. And since arthrosis is almost always associated with joint deformation, the term "osteoarthritis" is applicable to it.

The diagnosis of "coxarthrosis of the hip joint" is made on the basis of examination, patient complaints and examination results. The most informative method is X-ray: in the pictures you can see both the degree of damage to the joint and the cause of the disease.

For example, with hip dysplasia, the acetabulum is flatter and sloped, and the cervico-diaphyseal angle (tilt of the femoral neck in the vertical plane) is greater than normal. Deformity of the part of the femur located in the immediate vicinity of the joint is characteristic of Perthes disease.

Coxarthrosis of the 3rd degree is characterized by a narrowing of the joint space, expansion of the femoral head and multiple bone growths (osteophytes).

If the patient has had a fracture or dislocation, signs of trauma will also be visible on x-rays. If a detailed assessment of the condition of bones and soft tissues is required, magnetic resonance imaging or computed tomography may be prescribed.

Differential diagnosis is carried out with the following diseases:

The decrease in muscle volume accompanying the 2 and 3 degrees of coxarthrosis can cause pain in the knee area. Moreover, the knee often hurts even more than the hip joint itself. To confirm the diagnosis and exclude gonarthrosis, an X-ray is usually sufficient.

With diseases of the spine - osteochondrosis and pinched nerve roots - the pain is very similar to coxarthrosis. However, it occurs unexpectedly, after an unsuccessful movement, a sharp turn of the body or lifting a weight. Pain sensations begin in the gluteal region and spread down the back of the leg.

Radicular syndrome is characterized by severe pain when raising a straight limb from a supine position. However, there are no difficulties during the abduction of the leg to the side, as with coxarthrosis. It is worth noting that osteochondrosis and arthrosis of the hip joint are often diagnosed simultaneously, so a comprehensive examination is necessary.

Trochanteritis, or trochanteric bursitis, develops rapidly, in contrast to arthrosis, which can slowly progress over years and even decades. The pain syndrome builds up within a week or two, while it is quite intense. The cause of trochanteritis is trauma or excessive exercise. Movement is not limited and the leg is not shortened.

Ankylosing spondylitis and reactive arthritis can also be accompanied by symptoms that mimic coxarthrosis. The hallmark of such diseases is the appearance of pain mainly at night. The hip may hurt quite badly, but when walking and moving, the pain subsides. In the morning, patients are worried about stiffness, which disappears after a few hours.

Treatment of arthrosis of the hip joint

Coxarthrosis can be cured conservatively or surgically. The choice of the method of treatment depends on the stage and nature of the course of the pathological process. If diagnosed with 1 or 2 degree of the disease, it is treated with medication and physiotherapy. After the relief of acute symptoms, therapeutic exercises and massage are added to them. If necessary, a special diet is prescribed.

The sooner coxarthrosis is detected and treated, the more favorable the prognosis. With the help of medicines and therapeutic measures, you can significantly slow down the pathological process and improve the quality of life.

Non-steroidal anti-inflammatory drugs (NSAIDs) are used to relieve pain and inflammation. It should be noted that anesthesia is carried out in the shortest possible course, since drugs of the NSAID class can negatively affect the digestive tract and slow down the regeneration processes in the cartilage tissue.

It is possible to speed up the restoration of cartilage with the help of chondroprotectors. However, these funds are effective only in the early stages of the disease, when its hyaline cartilage is not completely destroyed. Chondroprotectors are prescribed in the form of tablets or intra-articular injections.

To improve the blood supply to the joint, vasodilators are used. For muscle spasms, muscle relaxants are advisable.

In the case of persistent pain syndrome, which is difficult to eliminate with pills, injections are made into the hip joint. Corticosteroids relieve inflammation and pain well.

Drug therapy can also be supplemented with topical agents - ointments and gels. They do not have a pronounced effect, but they help to cope with muscle spasms and reduce soreness.

Physiotherapy helps to improve blood circulation and cartilage nutrition. For coxarthrosis, procedures such as shock wave therapy (SWT), magnetotherapy, infrared laser, ultrasound and hydrogen sulfide baths have proven themselves to be excellent.

Treatment of stage 3 osteoarthritis can only be surgical, since the joint is almost completely destroyed. To restore the function of the hip joint, partial or total arthroplasty is performed. 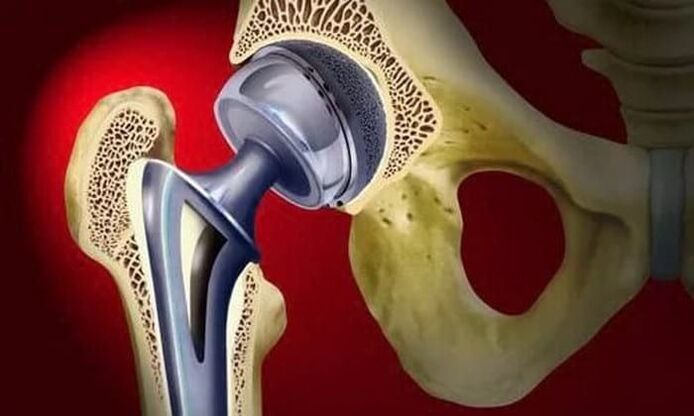 Surgical treatment is resorted to in advanced cases of arthrosis, when conservative therapy is powerless.

In partial prosthetics, only the head of the femur is replaced with an artificial prosthesis. Total prosthetics means replacing both the femoral head and the acetabulum. The operation is performed under general anesthesia, and in the overwhelming majority of cases (about 95%), the function of the hip joint is fully restored.

During the rehabilitation period, the patient is prescribed antibiotics to prevent infectious complications. The stitches are removed on day 10–12 and exercise therapy is started. The attending physician helps the patient learn to walk and correctly distribute the load on the operated limb. Exercise is an important step to increase muscle strength, endurance, and elasticity.

Working capacity is restored on average 2-3 months after the operation, but for older people this period can be up to six months. Upon completion of rehabilitation, patients can fully move, work and even play sports. The service life of the prosthesis is at least 15 years. To replace a worn out prosthesis, a second surgery is performed.

Without timely and adequate treatment, coxarthrosis can not only significantly worsen the quality of life, but also lead to disability and disability. Already at the second stage of arthrosis, the patient is given the 3rd disability group.

When shortening the affected limb by 7 cm or more, when a person moves only with the help of improvised means, a second group is assigned. The 1st group of disability is received by patients with the 3rd degree of coxarthrosis, accompanied by a complete loss of motor ability.

Indications for medical and social examination (MSK) are:

The main measures to prevent coxarthrosis are diet (if you are overweight) and regular, but moderate physical activity. It is very important to avoid injury to the pelvic region and hypothermia.

In the presence of risk factors for the development of arthrosis, as well as all patients with a diagnosed disease, swimming is beneficial. Sports such as running, jumping, soccer and tennis are not recommended.